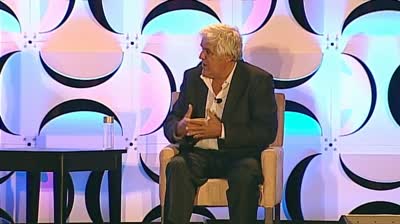 A Chat with Jay Leno

Acclaimed TV late night show host, admired stand up comedian, best selling children’s book author, much in demand corporate speaker, lovable TV and movie voice over artist, pioneering car builder and mechanic, and philanthropist . . . it’s no wonder that Jay Leno is widely characterized as the hardest-working man in show business. Jay Leno’s late night television ratings domination included more than two decades of THE TONIGHT SHOW WITH JAY LENO, winning every consecutive quarter of his hosting over the past 19 years, and he was recently installed in the Television Academy’s Broadcast Hall of Fame. As if night time dominance were not enough, Leno has also succeeded in the newest entertainment arena, JAY LENO’S GARAGE, of which he is a producer as well as star. The NBC creation, which is viewed at Jaylenosgarage.com, has gained an international following on the web, not to mention an Emmy Award and two additional nominations for Outstanding Special Class – Short Format Nonfiction Programs. This is a rare opportunity to enjoy an intimate chat with a true industry icon, Arrive early to be sure you get a seat!