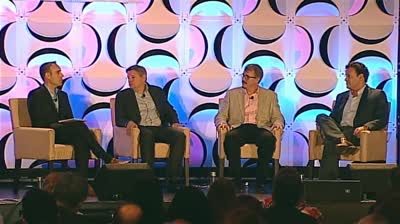 A Chat with Ted Sarandos, Mitch Hurwitz, and Vince Gilligan

NATPE 2015 welcomes Mitch Hurwitz, unmatched in his particular brand of intelligently high-level comedy, and Vince Gilligan, creator of uniquely engaging characters and dramatic arcs – two showrunners who have redefined television storytelling and the potential of new delivery platforms. They are joined today by a visionary executive regarding new opportunities in content distribution, Netflix’s Ted Sarandos. It is creativity both on the page and in the executive offices that leads to the audience’s deep and continued engagement across divergent channels and systems. Mr. Sarandos, Mr. Gilligan and Mr. Hurwitz will each share their first-hand perspective regarding what many are calling television’s new golden era, and the challenges and benefits they have experienced as a part of it. This is sure to be an extremely popular session – don’t miss out!