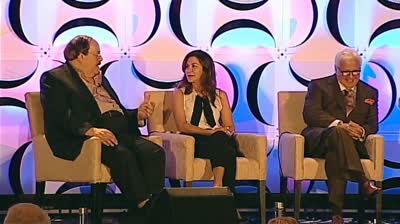 Currently hosted by Emmy Award winner Tom Bergeron, AMERICA’S FUNNIEST HOME VIDEOS is the longest running primetime entertainment show in the history of ABC. Beyond that remarkable record, AFV has become an iconic part of American pop culture, as evidenced by its entry into the Smithsonian’s permanent entertainment collection. Today, a version of AFV is seen in 130 territories worldwide, spreading American humor and clumsiness across the globe! Vin Di Bona is executive producer, with Todd Thicke and Michele Nasraway also serving as executive producers. Plan to enjoy a laugh filled visit with these purveyors – and arguably, the originators – of audience created content, and learn how this long running hit plans to advance into the digital age!