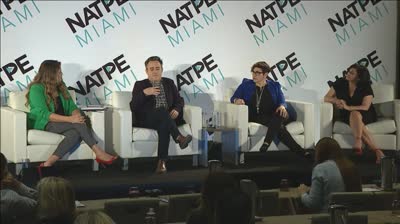 Finding formattable entertainment that gets everyone watching – a discussion about the big entertainment shows that will capture the imagination in 2018 featuring Moira Ross of Panda Television, the exec producer who has worked on all the BBC Saturday long-standing entertainment hits from THE VOICE, SO YOU THINK YOU CAN DANCE and STRICTLY COME DANCING – as well as being the show-runner on ABC’s DANCING WITH THE STARS – and who will introduce the new WEDDING DAY Winners, plus Tony Tackaberry from Lion TV, exec producer of the enduring favourite quiz hit CASH CAB, which has seen a Celebrity REDUX recently on Discovery – special guest stars from the Lat Am entertainment scene to be announced shortly.